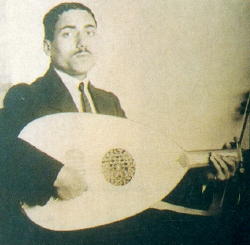 Mohammad el-Qasabji's father was an oud teacher and a composer for several singers of that time. Therefore, Mohammad loved the oud since his early years. He was at first a student of Islamic religion at Al Azhar and then became a teacher of Islamic Fiqh (doctrine), but didn't stop his musical studies at the same time. Later he just dedicated his time to music. His first composition was "Malish maleek fi el qalbi gherak" ("you are the only owner of my heart"). It was sung by Zaki Mourad, the father of Layla Mourad. This is when he started his professional musical career. He has been considered by the renowned musicians and critics as the best "modernist" in Egyptian music back then.

In 1927, his group consisted of none other than Sami Shawwa (violin), Mohammad El Ouqad (Qanun) and himself on the oud of course. Then he introduced to it a cello and a contrabass as an act of modernism and escaping of the traditional box. He composed hundreds of pieces, including music for movies and theatrical plays.

After he died in late 1966, Um Kulthoum kept his wooden chair empty behind her when performing on stage for some time, valuing his precious contribution to her musical journey.

It is well known that Qassabji was an oud mentor for numerous giants of the golden age of Arabic music. Among those were Riad el-Sunbati, Farid el-Atrache, and Mohammad Abdel Wahab.